I’ve been sent this article enough times that I thought it might be worth doing a blog on my thoughts on it. A disclaimer before I start: if you follow me on twitter you’ll know that I am generally extremely positive about lecture capture, you can find my work on this here (Nordmann et al., 2017, https://psyarxiv.com/fd3yj/) and here (Nordmann & McGeorge, 2018, https://psyarxiv.com/ux29v/), so feel free to interpret everything that comes next in light of that.

Things I liked about this paper

Importantly, there is a strong case for clearly communicating to students the danger of an over-reliance on using recorded content and the potential negative impact that low lecture attendance could have on their attainment. In the majority of cases, students would not be able to use lecture capture to compensate for severe lecture absence using recorded content and the current study can serve as useful evidence to help educate students of the potential impact of low attendance; it is important to clearly communicate that the idea of binge-viewing lecture capture content during revision period can make up for severe absence is likely to be misguided.

We also need to recognise that although the current study may be representative of a typical quantitative research methods cohort in the UK, the impact of lecture capture may differ across taught subjects and institutional contexts and this may limit our ability to generalise to a broader base of students. It is possible that intrinsic motivation to study the topic and intellectual curiosity may differ across subjects which means the impact of lecture capture might be subject dependent (see O’Callaghan et al. 2017).

We grouped the students into three lecture capture viewing behaviour profiles: (1) no substantive viewings (66 students/41.3%), (2) viewed between one and five times (46 students/28.7%) and (3) viewed lecture capture more than five times (48 students/30%).” And from page 14 “To examine the lack of interaction between lecture capture usage and attendance in more detail, we grouped the students into three profiles of weeks 4–11 lecture attendance behaviours: a group that never attended lectures (30%), a group that attended between one and four lectures (41.9%), and one that attended more than 50% of lectures (28.1%). 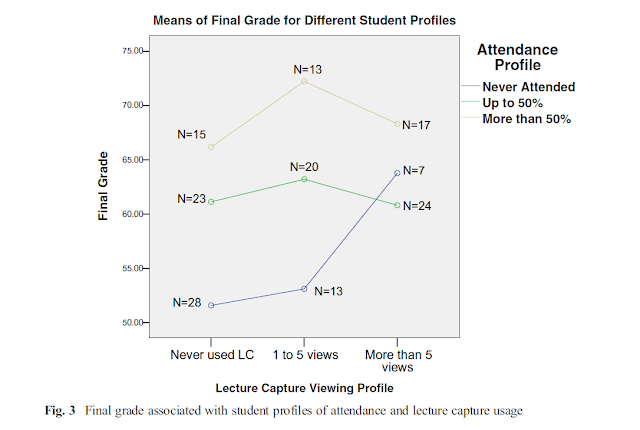 If you’re reading this and you’re the authors of this study, I imagine right now you think I’m a total asshat. Please know that my main issue with this paper isn’t actually anything in the paper. I think that this is another brick in the wall, it’s a study that has strengths and weaknesses, like any good Reviewer 2, it’s not the study I would have run and it’s not the write-up I would have done, but it contributes to our knowledge base.

Most importantly, it’s ignoring the key takeaway from this paper which is that lecture capture can have ill-effects particularly if you don’t provide any guidance and we should use studies like this to help show our students what to do. I’ve started ranting so I might as well finish. If you are that bothered about attendance decreasing, if you genuinely believe that attending lectures is crucial why not monitor attendance and make lectures compulsory regardless of lecture capture availability? If you don’t provide lecture capture and your lectures aren’t compulsory and you don’t take attendance, what do you think is happening to the students who aren’t attending? Is attendance at your lectures compulsory? If not, why not? The literature suggests a benefit of supplementary use of lecture capture when used in a manner that promotes deep learning, if your concern is truly your students’ education then the answer is compulsory lectures with supplementary lecture capture and clear study guidance. Actually, if we were all that concerned about learning we’d probably not be giving didactic lectures at all, but that’s another story for another day.

Fatima Ahmad said…
Do you require an extremely pleasant, attractive escort why should prepare go out with you to find the best places in the Doha city? All things considered, you don't have to go somewhere else, as the stunning Doha Escorts Girls Babes are prepared to play around with you.
4 December 2018 at 11:46

best erectile dysfunction pills said…
I know this web site provides quality based content and other information, is there any other website which offers these stuff in quality?
25 November 2020 at 01:14

erectile dysfunction treatment said…
I am actually glad to read this webpage posts which consists of lots of valuable data, thanks for providing these information.
25 November 2020 at 01:17